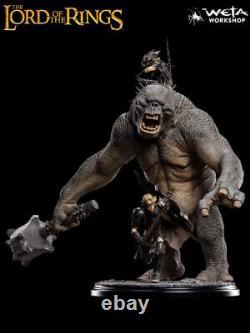 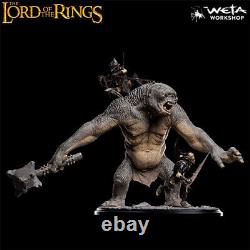 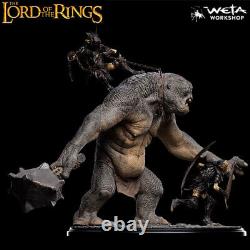 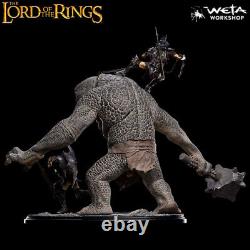 Up for Sale is a Brand New Weta Collectibles The Lord of the Rings Cave Troll of Moria Statue. Greatest of the Dwarf realms of ancient Middle-earth was Khazad-dum, where for two Ages of the Sun and Moon the Longbeards reigned, carving the kingdom of Dwarrowdelf from the living rock of the Misty Mountains. Riches they mined beneath the three mightiest peaks of Zirakzigil, Bundushathur, and Barazinbar, whom the Elves called Caradhras, but the Dwarves mined too greedily and too deep. In light less pits where nameless things gnaw the world, the picks of the Dwarves unearthed their doom. With its people slaughtered or put to flight, Orcs and other fell creatures infested Khazad-dum.

Halls once filled with light and mirth became blackened dungeons. Homes were brought to ruins. Moria it was called; the Black Pit, and few dared pass its gates but at great need or folly. With little choice else, the Fellowship of the Ring sought to slip unnoticed beneath the mountains, making a four-day journey through the dark of Moria with the Wizard Gandalf as their guide, but their passage would not go unmarked.

Striking at the Chamber of Mazarbul, a great force of scuttling, bug-eyed Moria Orcs fell upon the party, clad in black armor and bearing crude scimitars. Whipped and goaded into a rage by its cruel Orc masters was a lumbering Cave Troll. Though weak-witted, the beast was as strong as ten men and encased in a hide like iron. In three-fingered hands the brute gripped a great stone hammer, which it swung indiscriminately, crushing Orc and enemy alike as it charged down its quarry. Made from High Quality Polystone. Features the Legendary Cave Troll and Two Moria Orcs. Troll Towers Above at 24 Inches Tall. Prototype Sculpted by Jamie Beswarick and Yorke Yu. Created in Celebration of the Lord of the Rings 20th Anniversary. This Statue was Sculpted by Jamie Beswarick. Product Dimensions: 32.67" x 24.4" x 22.83 (W x H x D) / 83 cm x 62 cm x 58 cm. Please Note: Product Images are of a Pre-Production Prototype. Each Statue is Hand Painted and Minor Variations Will Occur.

This Statue is a Limited Edition Size of 500 Pieces Produced Worldwide. This Statue Arrived to us Brand New and Factory Sealed. We Opened and Inspected It. We Have Alot of Great Items for Sale.

So, Give Us a Try. You Won't Be Disappointed.